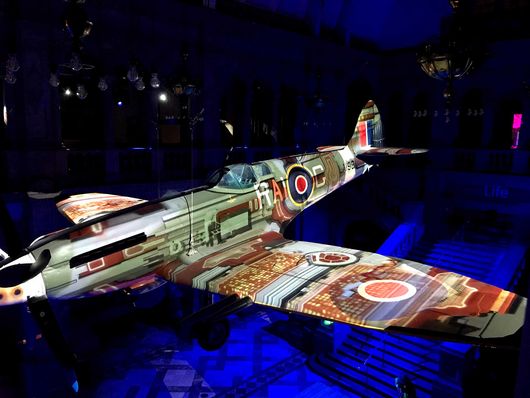 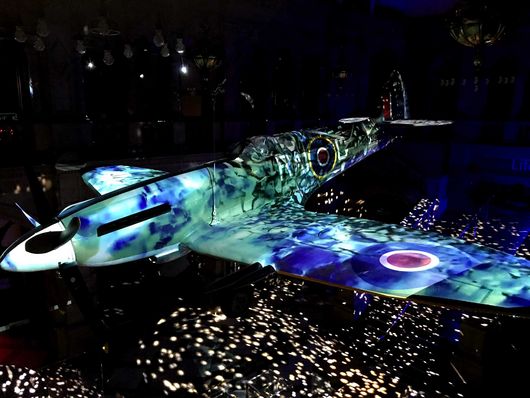 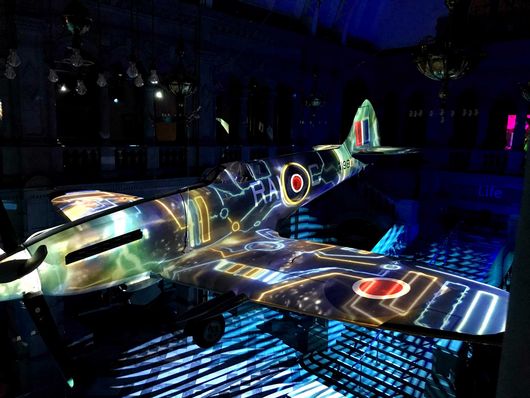 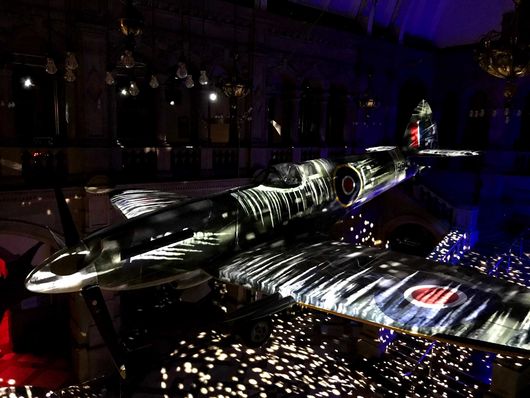 Named Elfingrove, the show took place over the Christmas period last year and featured a number of festive projection displays, including a three minute video projected onto the Supermarine Spitfire LA198 fighter aircraft, which is hanging in the main atrium of the museum. The video, created by Scottish events management company ‘itison’, and Edinburgh based projection mapping specialists ‘Double Take Projections’, took visitors from a futuristic Sci-Fi space battle to the history and use of Spitfires in World War II.

“We used eight Panasonic RZ12 projectors to project the content,” explained Craig Harrower, owner of Visulize. “Six were rigged straight to trusses, while two were on custom built mounts on the floor.” Since the classic WWII fighter aircraft is suspended from the ceiling, the position of the projectors was vital for covering the Spitfire, as guests could view the video from below and around the aircraft.

Visulize used AV Stumpfl’s multi-award winning PIXERA media server software to support this ambitious mapping project. The 64-bit system software boasts features such as real time preview editing, compositing and management. The software is designed with usability in mind, harbouring a simple yet powerful interface for beginners and professionals alike. It is an adaptable system, with an extremely powerful render engine that can be used for both LED and projection installations.

Visulize have been working closely with AV Stumpfl since the launch of PIXERA in 2019. “I’ve programmed media servers for years, and jobs like this have become so much more straightforward with PIXERA,” said Harrower. “The stability, features and sheer power of this media server system are really a game changer, not to mention the constant development of its capabilities from AV Stumpfl, even during the project.”

Indeed, days before the show rehearsals, the Visulize team noticed a small glitch in the software system. After reporting it, an entirely new software release for PIXERA was created by AV Stumpfl’s programmers and made available the same day, resolving the issue. “It was updated only a few hours after I reported it,” Harrower said. “What better support could you ask for?”

“The previous software I was using was nowhere near as advanced and flexible as this,” Harrower said. “I haven’t even needed to use it since. It’s not just the better workflows and functionality that PIXERA offers, it’s the support and knowledge of the dedicated AV Stumpfl staff that goes with it.”

The outcome for Visulize was a successful projection, despite some unexpected challenges due to alterations made to the plane whose wings had to be shortened in order to fit in the museum. “This projection project was complex, but with AV Stumpfl’s constant support and the capabilities of the PIXERA server and software, we were able to create something ultimately visually striking for the event,” Harrower concluded.