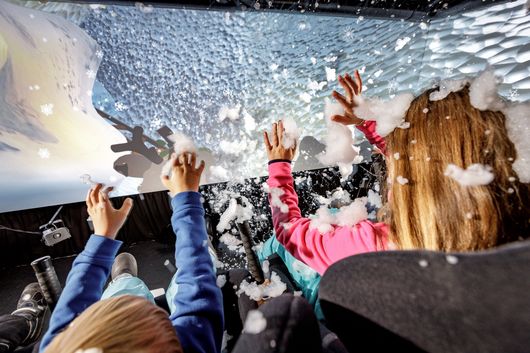 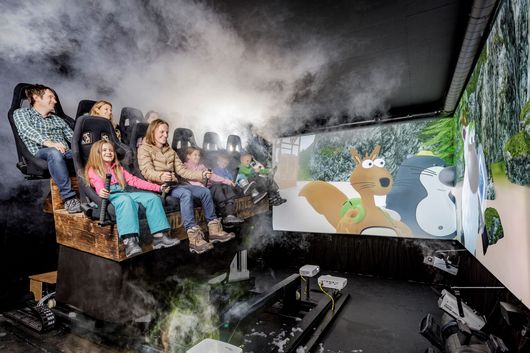 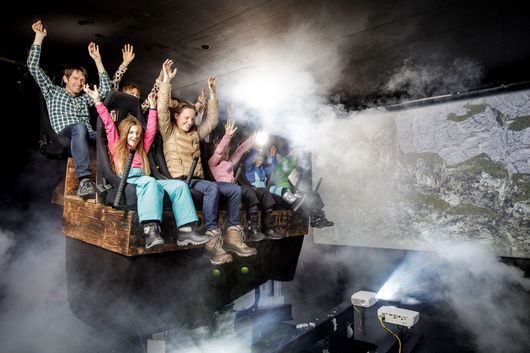 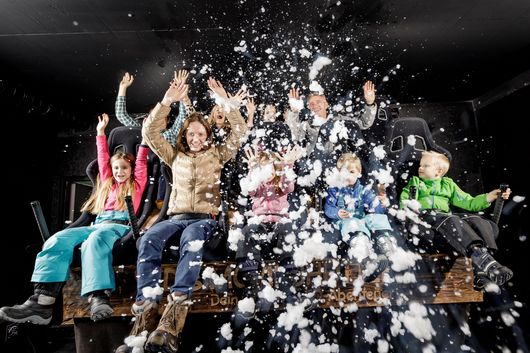 The German aufwind Group, one of Baden-Wuerttemberg's largest advertising and web-design agencies, was approached by the Schiregion (skiing region) Hochoetz Erschließungs‑GmbH & CO KG to design and realise a 5D cinema close to the Austrian Acherkogelbahn cable car mountain station.

Led by Lutz Bayer and Sandra König, aufwind Group develops a variety of concepts reaching from logo creation right up to the complete design and system integration of interactive flight simulators. aufwind.rides specialises in realising flying theatres and 5D rides.

The recent project for the skiing region Hochoetz revolved around the creation of just such a 5D cinema, that would combine multiple media to tell the story of the WIDIVERSUM, with the help of a 180° projection.

The WIDIVERSUM itself is the world of the Oetztal mascot WIDI, an extraordinarily adventurous mountain sheep.

Set in front of a picturesque alpine background at 2020m and inside the building of the Panoramarestaurant Hochoetz, the cinema can be found right next to the mountain station of the Acherkogelbahn cable car.

Surrounded by a modern cinema interior with a capacity for ten seats, visitors will be transformed into the protagonists of an eight minute long adventure ride, that unfolds on a 180° projection screen in front of them.  During those eight minutes, they will get to know WIDI and his friends a little better, whilst chasing after a crystal that was stolen by a wolf.

The simulator platform itself is comprised of a 360° swivel joint, 4 OPTOMA short throw 5000 lumen projectors were used for the projection.

aufwind Group CEO Lutz Bayer comments on the use of PIXERA: "We are always looking for innovative and reliable solutions for our international installation projects. We've had very good experiences with products from AV Stumpfl, which is why we decided to use PIXERA for the WIDIVERSUM project. Projection content playout, mapping, warping and the control of the film via UDP were all done with PIXERA. It was mainly the intuitive usability approach of this new product  and the Vioso integration that really convinced us. The client is very satisfied with the final results and especially the happy faces of the young visitors of the WIDIVERSUM-cinema leave us with no doubt, that our movie shuttle is truly great entertainment."

AV Stumpfl is an award-winning Austrian company that designs, manufactures and markets a range of high-performance mobile and installation projection screens and multi-display and show control systems for professional and business applications. As a family business, its founders started the company out of a passion for the advancement of presentation and installation technologies. The product range is warranted for 24/7 usage. AV Stumpfl is located in Wallern, Austria, and is supported by a global network of distribution and service partners. Or visit www.avstumpfl.com